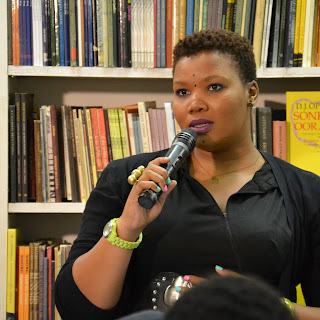 Audre Lorde once said: I have come to believe that caring for myself is not self-indulgence, it is self-preservation and that is an act of political warfare.

In my poetry… I am trying to find ways of staying alive. Preserving myself… as a black woman in a world that reminds me, every day, how much it wants me dead. I am questioning and reflecting; learning and unlearning… finding ways to keep breathing, and maybe... even dance.

Vangi Gantsho is a socially conscious poet, cultural activist and founder of NO CAMP CHAIRS Poetry Picnics, held at the Union Buildings on the second Sunday of every month. She has performed in and conducted workshops at poetry events and festivals around the world, including: Poetry Africa, the Word ‘n Sound Spoken Freedom Festival, Bridges – A Pan African Arts Movement in Brooklyn and the DMV Louder than a Bomb Youth Poetry Festival. She has also performed at the South African Literature Awards (2011), the Thabo Mbeki Africa Day Lecture (2012), the South African Heritage Week Exhibition In Libreville (2015), as well as in a number of poetry plays, including I Miss You Today (2010) and Secrets with the Moon (2013). As a producer, Vangi has put together shows such as Katz Cum out to Play: intimate conversations though poetry and music (2009), The State Theatre’s Night of the Poets (2013) and Human4Human (2014-2015). Her work has been published in various literary publications, including The Agenda (2004), Sabel (UK, 2010), Wits Press (2011), and Botsotso (2015). Most recently, Vangi released her début collection: Undressing in front of the window and is currently studying towards the MA in Creative Writing at Rhodes University.