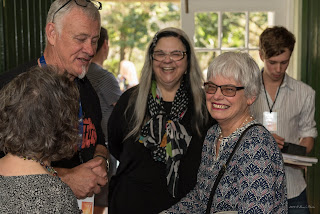 The second edition of our Poetry Competition was again a highlight for us. Over 300 entries were received, the majority in the adult section. It was good to see that in the schools’ section that there were clearly a few schools which had picked up on the event and encouraged their pupils to take part. It was also pleasing to see that we received a small number of isiXhosa poems this year. 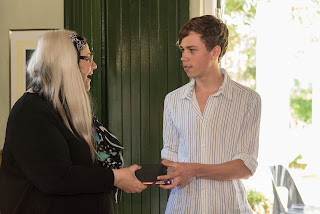 The judging process was wonderful for all involved, and it remains a highlight of the year for Billy and me. After sifting through the entries over many sessions, we were unanimous in our feelings on the School section winner. Dennis Buckland was a runaway winner with his poem Anthropomorphic. We were delighted that Dennis was at the Prize Winning, where he read his poem so eloquently.

I am anthropomorphic.
My disguise is human,
I inherited the suit that
The abstract dresses in,
Tailored by intellectuals,
And stitched by mothers
Patched piece by piece
By bygone civilizations.
I would weave a thread
Of my own, but it chafes,
It was made for the dead.
So at night, I strip bare
And feel the animal
Breathing down my spine,
And picking my lice
With awkward intimacy. 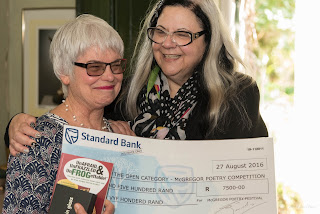 In the Adult section the choice was not as easy. We finally settled on our short list and sent it to our external adviser, a published poet of considerable stature. She sent her recommendations, and we were all in agreement. The winning poem was Hung Gun, by Georgia Gundersen. Georgia was on hand to receive her trophy and cheque from the sponsor of the event, Leila Witkin.

On the wall there is a rifle
Over the mantle lean as a rapier.
There where flames split and flare, its
Barrel grey as slate; smooth as surface
Water, and to its form is clad that sense of
Its possessor. A craftsman’s piece of
Deadeye marksmanship; the
Weapon of a dry and dilatory man.
And the sling hangs sparely.
What has the one-eyed thing
Dropped in its sights to lie
Limply on a litter of grass?

A hare as long and prescient as the
Gun, the wind making eddies down to the
White of its taupe black-ticked fur. The
Lean woodsman turns towards home
Where the hare is laid out, and
The unerring line of rifle returned
To its backdrop of whitewash.

Special thanks to Leila for her generous sponsorship of this event. Without you we just could not do it! A huge thanks to all those who entered. As Leila said on Saturday morning, you are all winners! To Billy Kennedy, and Hester Van der Walt who help with the initial judging, a huge thank you for your wisdom and commitment. Thanks also to Patch for her help- you are a star!

“I am, very fond of you…….” he said
That was the moment
I should have said
“Fuck You, Mr Fond!” and taken,
To his rectum
With a wire brush,
And Dettol.
Instead,
I answered very sweetly
Lacing the cautionary acid,
“Darling, Fond is what you feel for
your great aunt;
The one whose will
you’re planning to plunder. Is there,
not another adjective
perhaps, a more suitable synonym
the Puer Aeternus might
slide from his repertoire
……to ensure the aim takes out
the mark?
But, when he cocked his head, confused; touting boyish-charm
I retracted my chameleon tongue
Saving him. Condemning myself
Bowing; to the domestic Eve
Crushing the Wild Lilith
And scrambled about for redemptive Vice
I said, “Would you like bubbles? On the balcony?”
“ofcourse,” he answered, “it’s Friday.
C’mon. It’s the freakin weekend, Babeeeee!”
So bubbling, I unpacked new lingerie
Not understanding why Judith-of-Bethulia
Howled and raged inside of me
While I was cradling his head
in my hands.
On the balcony.

and crawl out on our bellies

If one can have sex with a limp,
that's how I do it
half-hearted
half-assed
half-breasted
off-kilter, leaning to one side
like pushing children in a wheelbarrow
they stand up, throw you off-balance
till you dig your heels in the soft dirt
to keep it from tipping over
negotiate
offer a lollilop or a pacifier to get them to
just sit still
concentrate
till the end of the ride

There is a thing with feathers
that lives inside my heart.
Some days it sleeps quietly
in heart chamber number four.
Other days it flutters and fights
and creates a second beating in my chest.
The madness of those wings
that I battle to silence,
ends in fits of rage.
On those days, my pen is a knife
with which I cut myself open
on a straight line between my breasts,
and out flies this bloody dream

with wet wings and all.

Still, so still.
Stunned.
I breath
Cool evening air,
and stare
and stare.