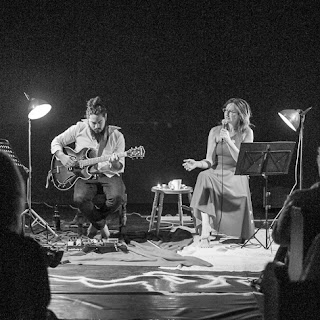 "Blood and Snow: poems of Loss, Longing and Love" a collection of poems written by Louise in an attempt to understand her own experience in 2008 with Stage 4 Lymphoma and resultant disability. It represents an ongoing investigation into themes of physicality, illness, mortality, grief and change and is a dedicated exploration into the transformational qualities of Love.

"synergy between Louise’s soft voice, sometimes flaring into drama, sometimes gently lullaby soft, worked beautifully with Keenan’s rippling riffs, interpolations of staccato percussion and layered sonar wordless hymns. Louise has an incredible ability to dance between the sublime and the quotidian with deep tenderness, and an allowing acknowledgement of the reality of both, and their interconnectedness, their interweaving of love and loss. Desire and longing."

"beautiful. Thank you for having the courage to venture into strange, wild territory, and find the language to bring it home. I so loved the interplay between your utterances and Keenan's equally daring sonic language -- otherworldly and intensely familiar at once."

" Where beauty is beauty, anger is anger, love is love, pain is pain, and all are rightfully honoured, with delicacy and consciousness, as valid human experience through honest and beautifully deliberate celebration. It's always-present music and poetry. It's empowering to encounter art that enjoys all the truths of what it is to live."

Louise Westerhout is a published writer and poet: winner of the McGregor Poetry Festival Competition 2015. She is a short story writer and co-founder of Intermission, a multimedia artist collaboration which participated with "Admission" in the GIPCA Live Arts Fest 2014.
http://www.gipca.uct.ac.za/live-art-festival-works-and-biographies/admission/
http://m.youtube.com/watch?v=RvCnlce36aA

She graduated from UCT with a BA (Hons) in African Studies / Anthropology. She has worked internationally as an educator and as a healer. Westerhout’s professional career since 1997 is embodied in the practice of healing, as therapist, Reiki Master, shaman, medium, Marriage Celebrant and yoga instructor.

Keenan Ahrends is a Cape Town based Jazz guitarist who started playing at the age of fifteen. After completing his jazz performance studies at the University of Cape Town and the Norwegian Academy of Music in 2009, Ahrends has been actively involved in performing, composing and teaching. During his tertiary studies, he studied under the likes of Jon Eberson, Eckhard Baur, Alvin Dyers, Andrew Lilly, and Mike Campbell.

Ahrends has been commissioned to compose works for the Goema Orchestra. He plays regularly and tours nationally with his Trio. He is semi finalist for SAMRO Awards August 2016.