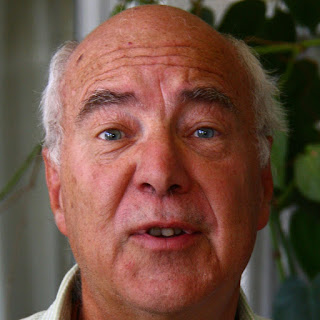 Balancing on the Reaper’s Blade

I am washed...in the river of earthly delight (Mary Oliver)
We share poems that dance on the blade edge, that celebrate the life-death mystery , that map the undiscovered country, that launch the boat so we can cross the waters flowing into the mare incognotum – the sea of unknowing.

I must have been baptised in a river mouth of images...for I splash in a sea of metaphors.... literal truth eludes... For more than six decades poetry has travelled me through the mytho-poetic lands that border on the silent wastes where words elude us.

We ourselves shall be loved for awhile and forgotten. But the love will have been enough...There is a land of the living and a land of the dead and the bridge is love, the only survival, the only meaning.” (Thornton Wilder) 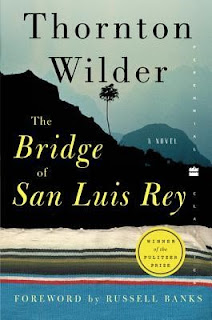 I have been thinking of how writers have approached these lands. Wilder was born in the two lands he speaks of. His twin brother died at birth. Wilder’s words at the end of The Bridge of San Luis Rey, have been resurrected in And the Bridge is Love, composer, Julian r Howard Goodall’s work for cello and strings. Also as the title track of the Lloyd Webber recording released in 2015.

Perhaps there are six lands not only two that share a border, all edging the sea, the mare incognotum. The sea of unknowing. There are no bribable’ customs office, no passport control. Though there might be rivers to cross up mountain passes with swinging suspension bridges and chasms below. And on the journey a mysterious figure accompanies us. We feel this impartial presence though we never see it. The one who in the mediaeval miracle/morality play utters the words ‘Everyman will go with thee and be thy guide, in thy most need to go by thy side’. Death the leveller. 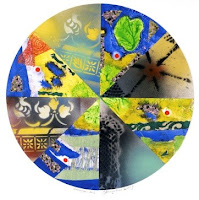 These lands form a six segmented mandala. Encircled at the outer wedge-edge the ocean. Nor are they necessarily of equal size as some take longer to traverse. Two of these are the lands Wilder designates. The living , the dead. In the first, if we a lucky and blessed, Zorba dances and sings:

I felt once more how simple and frugal a thing is happiness: a glass of wine, a roast chestnut, a wretched little brazier, the sound of the sea. Nothing else..... To have the stars above, the land to your left and the sea to your right and to realize of a sudden that in your heart, life has accomplished its final miracle: it has become a fairy tale....God changes his appearance every second. Blessed is the man who can recognize him in all her/his disguises. ....One day I had gone to a village. An old grandfather of ninety was busy planting an almond tree. ‘What, grandfather!’ I exclaimed. ‘Planting an almond tree?’ And he, bent as he was, turned around and said: ‘My son, I carry on as if I should never die.’ I replied: ‘And I carry on as if I was going to die any minute.”

Of the land of the dead, ‘when we have shuffled off this mortal coil ‘ we cannot speak for like Hamlet we go to ‘the undiscovered country from whose bourne no traveller returns’ – though some say they have followed the light tunnel and returned for their crossing was not yet.

Then there is the land of the dying where disease is King. Cancer, alzheimers, emphysema and cohorts form the impartial ruling elite. Ever an individual journey. How long a person stays in such a land is seldom known.

In the fourth land live the temporary dwellers who cross over from the land of the living. Dual citizens. They live in this holy space for these are those who love and accompany the dying. The time will come when they cross the bridge to the fifth country where they take on for a while, a new citizenship, joining those who mourn and love the newly dead. Some offer Hospice and spiritual care. Those they have loved awhile and lost yet not lost. In the fourth and fifth countries the air is rarer here as on Kilimanjaro and can be painful to the lungs. Perhaps poet, David Whyte, refers to these two lands in the opening of ‘Tilico Lake’:


In this high place
it is as simple as this,
leave everything you know behind.

Step toward the cold surface,
say the old prayer of rough love
and open both arms.

Gerard Manley Hopkins writes from this fifth land when he celebrates the life of Felix Randal, the farrier:

I) Who have watched his mould of man, big-boned and hardy-handsome
Pining, pining, till time when reason rambled in it, and some
Fatal four disorders, fleshed there, all contended ...


How far from then forethought of, all thy more boisterous years,
When thou at the random grim forge, powerful amidst peers,
Didst fettle for the great grey drayhorse his bright and battering sandal!

Is there a sixth unknown land where in the cycle we choose to take on new shapes as in the Platonic myth On the Soul? Socrates touches on an ancient theory. As the souls of the dead in the underworld come from those living in this world, the living souls return from the dead . All things come to be from their opposite states so coming-to-life balances out dying.

There are hints of this in John Donne’s ‘A Valediction: Forbidding Mourning.’ While the poem is about parting in this life, it applies to cyclic nature the great separation. Here are the last three verses:

Our two souls therefore, which are one,
Though I must go, endure not yet
A breach, but an expansion,
Like gold to airy thinness beat.


If they be two, they are two so
As stiff twin compasses are two;
Thy soul, the fixed foot, makes no show
To move, but doth, if the other do. ...


Such wilt thou be to me, who must,
Like th' other foot, obliquely run;
Thy firmness makes my circle just,
And makes me end where I begun 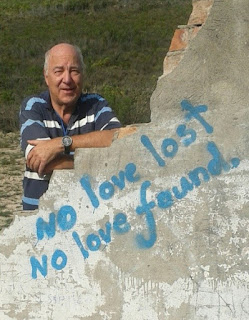 Hiking a mountain path recently I came across a grafitti’d ruin. Perhaps this sign could hang above the suspension bridges at the crossings between the six lands.


Back to Poets page