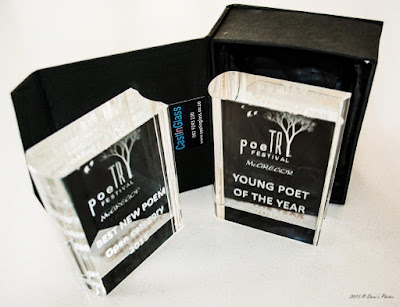 Judging a competition like this was no easy task! The organisers received hundreds of entries, and it was a pleasurable, though lengthy- process to give each entrant due diligence. Finding a winner in each category had a number of difficulties. The poetry reflected different styles and content, and was also in different languages.

Afrikaans and English entries were separated- unfortunately we had no IsiXhosa entries this year- and the judges spent many hours whittling their piles down. When we arrived at a more manageable number, all the shortlisted poems were read out loud to each other. A further shortlist was thus developed. The judges then arrived at what they considered their top three in each language in each section. Independent poets were then consulted as to their opinions. We were happy to note that their choices mirrored ours. We then sat together as a group and arrived at a final decision as to the top poem in each category.

Under 18 yr finalist Onele Rolobile is from Cape Town and attends The Cape Academy of Mathematics , Science and Technology. She won a Gift Voucher for R2000 from Exclusive Books for her poem I’m at War

I’m At war by Onele Rolobile

I’m at war with myself
I’m at war with my thoughts
And choices
I was raised to always trust your instinct
what I think is right IS right
but lately I’m afraid they will kill me
I’m afraid of the reflection I see in the mirror
Because I know…..
I know that WHAT I see is not WHO I am
and Lord knows my mom didn’t raise a vindictive monster
WHO AM I
I’m at war, but I don’t even know who I’m at war with…
but they tell you that you can lose the battle but win the war
HOW ?
See… this is why I’m at war
Because the world I live in tells me I’m crazy for being myself
It tells sixteen year olds that having “relationship” goals is better than having “life”
They call it living in the moment,YOLO
I’m at war ..
But it’s no longer with myself
Its with who I’m SUPPOSE to be ..

The winner in this section was a local girl from Bonnievale, Mia Beukes who attends Bonnievale High School, for her delightful piece entitled Namiblied. Mia won herself an I Pad for her efforts. 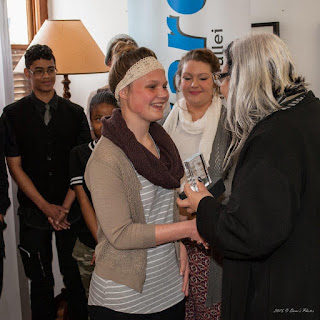 In the adult section the winner was Louise Westerhout from Cape Town for her wonderfully descriptive poem entitled, I Simply Left. 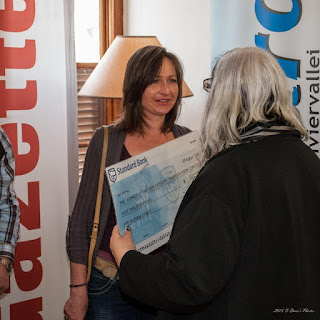 I SIMPLY LEFT  by Louise Westerhout

I simply left
rose up
wafted out like cigarette smoke and chatter mid-set the tuned-out
soloist mounted his offensive while I slipped out toward the back (I'd
come in for free at the front but man I paid in full) skint now thigh
deep in sharp faces and flat gazes past leaning mops, stacked plastic
chairs, obsolete guest lists, fibbing stock charts, bruised beer
crates dribbling on the way I grabbed a used ashtray stubbed out my
heart  in the glass bottom

all the way past the halfwit toilets,  photos of greats, me-me beat of
wings against bare bulb, right to the end of the joint I squeezed past
offended dumpsters rearranging their junk under too-tight lids over
threshold under exit sign

then the air was silent
chilled
I flexed the collar on
my loner cape I
fucked off.

We were delighted with the interest shown in the competition, and also by the quality of work before us. We hope that the competition can become bigger and better in 2016! Thanks to everyone who entered, and special congratulations to the winners.